The wedding in traditional Japanese  society means a bond between two families. It was celebrated in the grooms house inviting neighbors and relatives with homemade food and sake. It was not until 1900, when the Crown Prince Yoshihito held his wedding in Shinto style, that people started holding weddings in shrines, and later in hotels, and ceremony halls.

Until recently, a Japanese traditional wedding was an occasion for the families to announce and acknowledge the beginning of the new generation in their home. It was a formal occasion, but at the same time, it was a warm, homey ritual, wishing the newly wed couple the best in every ways. 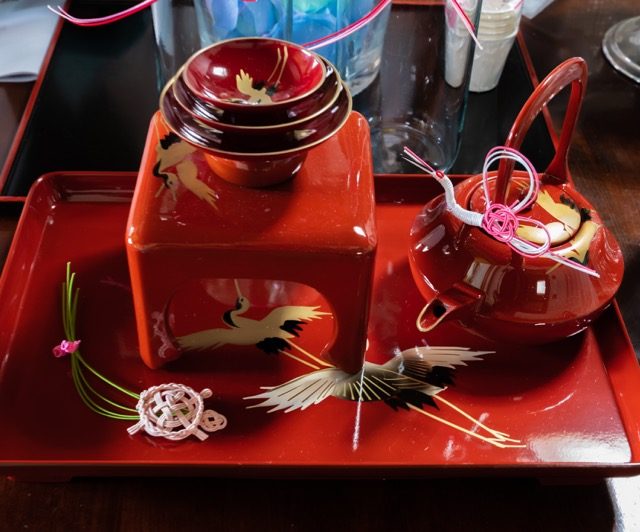 That is why Japanese wedding rituals incorporate so many items that have strong symbolic meaning. Mizuhiki knot used to decorate the venue or tied to a wedding favor is often shaped like a crane or a turtle, symbolizing prosperity and a long life. Also the pine tree is the symbol of longevity and everlasting marriage, and is one of the favorite motifs used in weddings.

The most popular tradition in a Japanese wedding is the exchange of nuptial cups, which is called san san ku do. San means three and ku means nine. So san san ku do means three, three, and nine. The groom and bride drink sake three times each, from three different-sized sake cups called sakazuki. In their exchanging cups, they are symbolically exchanging their marriage vows. 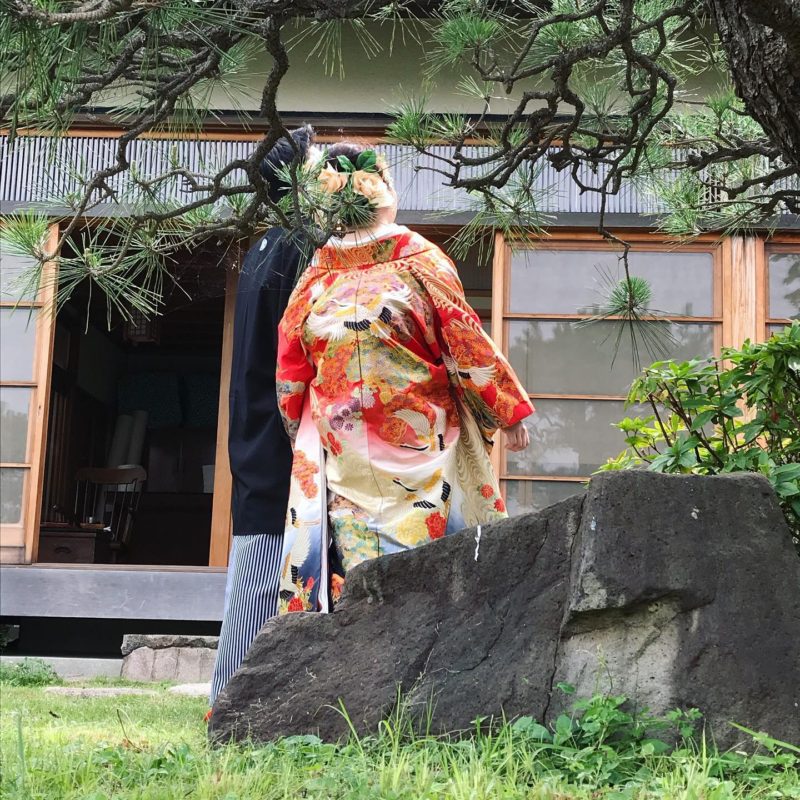 The traditional wedding gowns for the brides are Shiromuku and Uchikake.  Shiromuku comes all in white, white meaning purity and that the bride is ready “to take in any color” or accept the values of the groom’s family. Shiromuku often comes with a Wataboshi, a large white hood equivalent to a veil in the Western bridal dress.

Another  type is the Uchikake. This colorful and gorgeously embroidered kimono used to be worn by the ladies of the Samurai lords from the Edo period. The motifs are loaded with symbolic patterns for good fortune, longevity, prosperity and long-lasting marriage, such as crane, pine, turtle, ducks, rake, fan, treasure box, ship, etc. Traditionally, a Tsunokakishi is worn on the head. Tsunokakishi is a white cap smaller than Wataboshi, adorned with ornaments including delicately crafted ivory Kushi. Many people recently choose to wear the hear in a more Western style, often with floral accessories and headdresses. 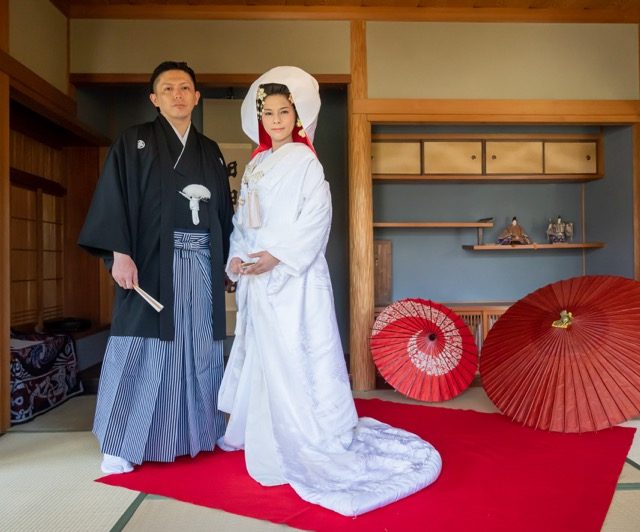 Yumiso (pronounced You-me-so) is a family house built in the Showa period with a Japanese room made in shoin-zukuri style that have started out 16th century. This is the style you will see in many temples and Zen abbot’s quarters, and is the basis of the traditional Japanese room, now less and less seen in regular residents. In Yumiso, we will provide this room together with the yard with pine trees, so you can enjoy the air of the traditional Japanese home all to yourselves. May it be a photo shoot or a full wedding ceremony, the English speaking owner of the house will help you out from preparation, making you dream Japanese wedding come true. Please let us know what you want to do. There is no limit to what you can do here in Yumiso, we are here for you to make it happen. For more information and English (or Spanish) assistance, contact us at:
youme-so@ts-network.co.jp.